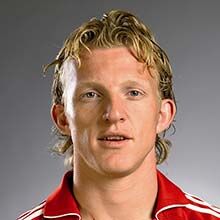 Dirk originally played for dutch club Feyenoord, but in 2006 he understandably wanted leave a country with unlimited hookers and bud, with its slightly better weather, for the north west of England, where it drizzles 894 days a year, and there is not unlimited bud, but still unlimited hookers, all be it a bit more dutty. Dirk chose a city where its residents have whistles lodged in their throats as babies, and where they will steal anything which isn't nailed down, along with 97% of the stuff that is. On arriving at Liverpool FC, Dirk had to endure a spell under the massive cunt that is Rafa Benitez. Benitez actually won the official prize of "Most Cuntish man of the year" in 2K6, 2K7, 2K8, 2K9 and 2K11 (he failed to win in 2K10 because Nick Clegg came to public attention.) After enduring this spell Kuyt became a fan favourite at the Anfield club, mainly because his first name was Dirk, which amused their tiny minds.

Kuyt is well known for being a porn star. In 2005 it was reported that he had an 18569 inch penis, which he uses to full affect. Although it was thought that no doubt could be cast over his sexuality, after he bonked 1.7million girls in a fortnight, falling into a viagra induced coma for 49 days, Dirk did reportedly have an awkward three-some with fellow team mate Pepe Reina, and Adrian Chiles. This was alleged to have taken place in the Saudi Arabian Alps during a skiing trip, although it is unclear whether the three-some took place whilst actually skiing, or who went in the middle. When asked to comment on what happened, Dirk said, "I'm too much man for 1.7M women, and also I was fucked off my tits on drugs". When the interviewers looked shocked at these revelations, Dirk pointed out "Well, I am Dutch."

In 2007, Kuyt released a charity single to raise money for the release of Nelson Mandella, despite the fact he was released in 1990, although there was outrage when it was reported that some of the money had been spent on an English speech therapist for Steven Gerrard. The single was a cover BBK's massive hit "too many man" and sold 8billion copies in Stoke-on-Trent alone, however it was changed to "too many gals" and featured John Terry and Skepta, who spectacularly "whited up". "Too many gals" won the brit award for best international single, and rightly beat off the shit opposition of Baby by Justin Beiber (cunt). There was shock when Dirk went up onto the stage to collect his award, baked off his face with his18569 inch penis hanging out, he justified this by saying "Well, I am Dutch." Dirk was questioned by police after the awards ceremony when he was accused of accidentily strangling 18 people with his penis on the way up to collect the award, he was released with a caution.

- Rolling himself a massive dooby

- Getting absolutely fucked off his tits on drugs

Community content is available under CC-BY-SA unless otherwise noted.
Advertisement